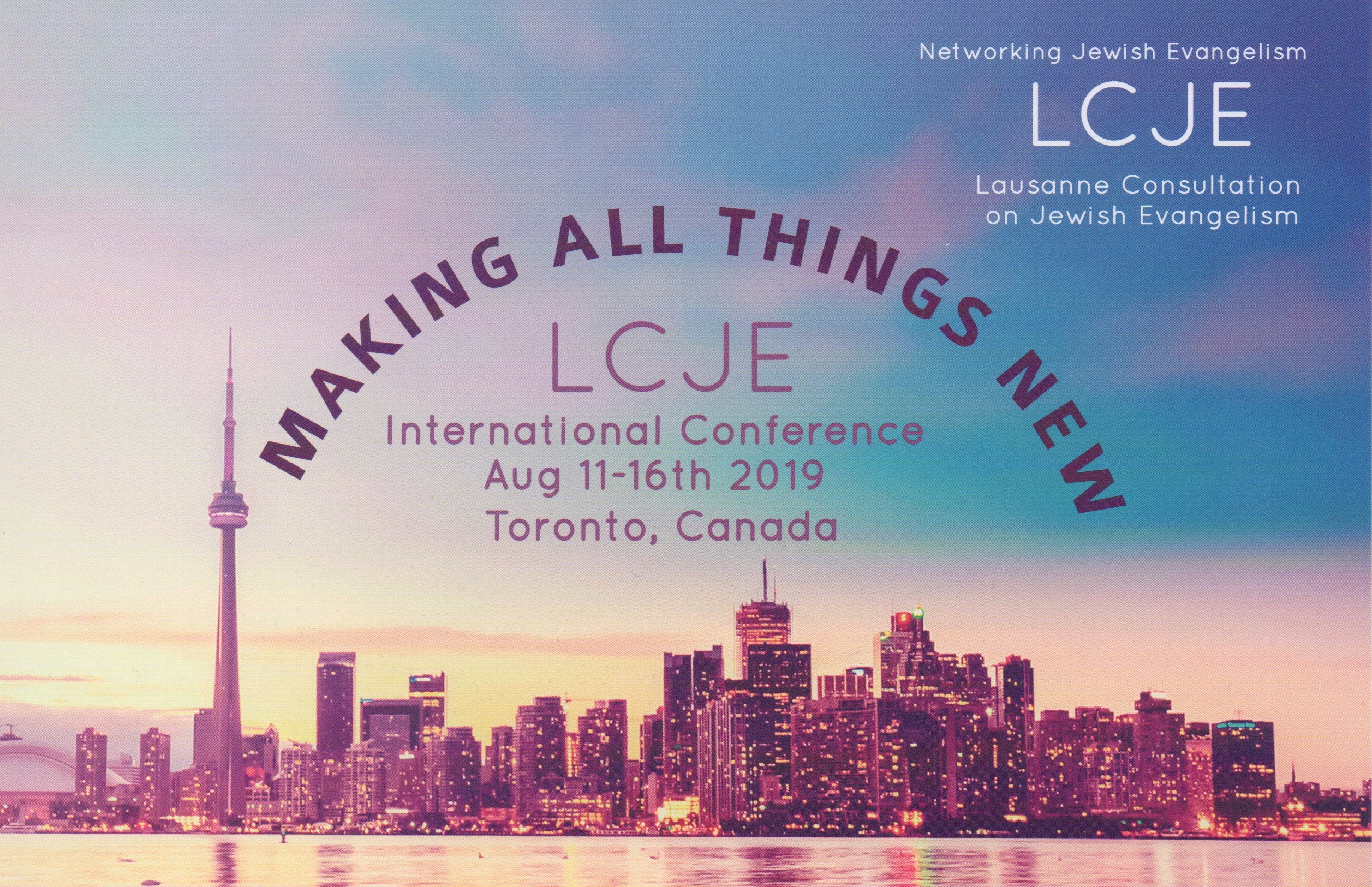 The theme of the 11th LCJE International conference was: ’Making All Things New’. Each day we looked at diffferent aspects of the theme and asked ourselves, how does this relate to Jewish evangelism today and to the different ministries we are involved in as members of the Lausanne network for Jewish evangelism? The sub-themes were: Renewed call, new vision, new generation, new partnership, renewed commitment and passion.

All throughout the week we studied the book of Colossians together. We did so in small groups around tables, using the inductive bible study method, with enough time for personal reflection, group interaction and praying for one other.

Each day there was a plenary session covering current burning issues related to Jewish evangelism and Jewish ministry.

Afternoons were devoted to workshops and networking and in the evening we looked at the theme for the next day. Two different speakers presented the theme, and in our table groups we interacted with the theme and with one another.

At this conference we engaged with one another as we continue to network together in the field of Jewish ministry for the sake of the Gospel.

Hope in the Holy Land: Delving Beneath the Surface of the Israeli-Palestinian Conflict

Come and hear some of what Justin Kron has learned in the process of producing a documentary film project aimed at bringing greater perspective and sensivity to God’s heart for both Jews and Arabs in the Holy Land. This project was inspired in part by his observations among Evangelicals toward their increased engagement with the Palestinian narrative and their shift away from supporting the Israeli narrative. Our discussion will consider the implications this shift may have on your ministry.
www.hopeintheholyland.com
They Need Our Voice!

Jewish Worldviews and the Role of Tikkun Olam.

This workshop will look at the origin and impact of the Jewish concept of ‘tikkun olam’ and show its relevance and application in Jewish evangelism, from its impact on the ultra-Orthodox to the extremely secular.

Shifting Cultural Trends and the Impact on Communicating the Gospel

With the increasing use of technology, many cultures are shifting from literate to oral orientations. This is not just a matter of how we communicate, but it impacts the way that we think, including an emphasis on shame and honor over guilt and innocence. This session will provide a targeted approach on shame and honor in witnessing to Jewish people.

A History of Jewish Missions in Canada

Why did Canadian Hebrew Christians play such key roles in the birth of modern Messianic Judaism? Current Jewish missions in Canada might easily be seen as extensions of their American or British counterparts, and the stories are closely linked. But major figures in the birth of Messianic Judaism (and the promotion of Hebrew Christian churches)came from Canada and they strongly reflected a colourful, dynamic missions environment.

Resources:
The History of Jewish Missions in Canada
Volman, Ben, More Than Miracles: Elaine Zeidman Markovic and the Story of the Scott Mission (Castle Quay Books, 2015).

Couples in Ministry - How To Survive and Thrive

Hosted by Dave and Phyllis Bennett

In this workshop Dr. Spradlin will provide 5 biblical Definitions related to Imagination, Creativity and the Arts (a beginning theology of creativity), and how this biblical understanding CAN strategically increase the effectiveness of Messianic Creatives wanting to creatively impact Messianic Ministry throughout the world.

When They Don’t Want to Hear: Evangelizing the Ultra-Orthodox

Ultra-orthodox Jews don’t welcome new ideas, most of all the gospel. Why would an ultra-orthodox Jewish man engage with an “outsider” who presents ideas that are not only foreign, but considered antithetical to his entire way of life? Is it possible to make the gospel and haredi culture intersect in meaningful ways when just a mention of Jesus creates suspicion, hostility, and disengagement? We’ll explore those questions and share our experience evangelizing the ultra-orthodox in Jerusalem and New York.

Finding the BACK DOOR: Entry points for the Gospel to Haredi Women

How do we get into the closed community of Ultra-orthodox women? Is it possible to reach women who are under constant surveillance in their community? Is there a way to help women see outside the boundaries of their entire way of life? What are the risks involved in bringing the gospel to Haredi women? We’ll talk about the reference points we found while reaching out to Haredi women in Jerusalem this past year.

The Legacy of Jacob Jocz

Hosted by Therese Newell and others

The Rev. Dr. Jakob Jocz (1906-1983) was an amazing third generation Jewish believer whose family served with the CMJ Mission in Warsaw until 1939. He served as London Director of CMJ UK and then as Director of the Theology Department at Wycliffe College, Toronto. A seminal messianic Jewish writer and thinker, his legacy has been nearly forgotten. Come and learn about one of the most significant Jewish believers of the 20th century. Featuring an interview with his son Phil and a surprise announcement!

How to get churches involved in Jewish ministry?

Why should the church care about Jewish ministry? How can the church do Jewish ministry? Does Jewish ministry work in a small church? Will it work in every church? What if there is no significant Jewish population in the area? A 2018 survey by LifeWay Research estimated that there over 870,000 Jewish people in the churches of America. It is time for the church awake to her calling. Nearly one millikon US evangelicals are Jewish

Jewish-Gentile couples, that are dating and intermarrying, are now the norm in many countries. We should respond to these changes in global Jewry as an opportunity for applying spiritual ministry. This workshop will put light on the timely opportunity. Let’s offer some practical ideas for Gospel engagements with Jewish people. Come, share resources, what you are doing and consider possibilities for cooperation.

The only ministry in the world, offering Bible believers the opportunity to become missionaries to the Jews, without even leaving their homes! What better way, can anyone demonstrate their faith in the God of Israel, and showing their support of His people, than by opening their hearts (and homes) hosting His people? Your opportunity to show love, mercy, support and friendship and even share the Gospel with God's chosen people in the most practical way possible - through the gift of hospitality! (TEOTE ministry - www.teote.org / HIT network - www.HITinternational.net)

Children’s Ministry – Discipling the next generation

Do you love being around children? Would you like tools to be able to give these young ones the ability to grow strong in the Lord?

Jeannie will be sharing from her experience of over 30 years of teaching children and helping to raise up the next generation to walk boldly in the Messiah. Her lessons and insights are based from instructing and mentoring children in Israel and abroad.

Jewish evangelism in the digital age

There is no escaping our world’s fast-paced growth in technology and media. If so much around us has changed, so should our efforts in evangelism and outreach. In this workshop, “Jewish Evangelism in the Digital Age”, we will explore ways we can use digital media to engage and serve the Jewish community while also equipping believers with the tools they need to share the gospel. Case studies will also be explored to see how Chosen People Ministries and other ministries have used Social Media during the last few years to present Yeshua to the Jewish people.

We will focus on how to:

Social Justice Opportunities ... As An Outlet for Jewish Evangelism

”Social Justice.” Who knew two simple words could become so controversial in the Evangelical world? Are advocates of the concept wanting Christianity to become neo-Marxist or simply an opportunity to live out Micah 6:8? Is ”Social Justice” nothing more than a return to the 1920s Social Gospel Movement of Walter Rauschenbusch or perhaps an avenue to do Jewish Evangelism in the 21st Century? Is this a battle between Snowflakes vs. Bran Flakes? Or just the Gospel?


Links for Bibliography
Scott Coley -- "Charity Isn't Justice"
Kevin DeYoung -- "Were the First Christians Socialists?"
Amy Downey -- Ministry Blog "Social Justice ... Is It Biblical?"
Marty Duren -- Examining the Justice of the Statement on Social Justice and the Gospel"
Michael Novak -- "Social Justice: Not What You Think It Is"
Neil Shenvi -- The Incompatibility of Critical Theory and Christianity"
Christopher J. H. Wright -- "Whole Gospel, Whole Church, Whole World"
Statement on Social Justice
Please Note: This bibliography has sought to be a cross-section of views and represents the spectrum of opinions. Inclusion does not represent agreement or disagreement but is strictly here for informational purposes.

Boycott, Divestment and Sanctions, the BDS Movement is co-led by Justin Kron and Tuvya Zaretsky. The workshop will explain the BDS movement origins and the key activists who are pushing an anti-Zionist agenda and making anti-Semitic threats. We will show troubling implications for the body of Messiah in Israel and the Diaspora while also naming some of the collaborating “Christian” agencies and churches in North America. Bring your questions and insights from exposure to the BDS Movement.

Over the Last two decades, there has been amazing response to the gospel among ancient tribes historically connected with the people of Israel. The Bete Israel of Ethiopia and Lemba of Zimbabwe are two examples but others have been emerging. Who are they? How did they get there? How do we know they are connected to the people of Israel? This workshop will explore these questions and the incredible growth of the Messianic Jewish Congregational Movement in Africa.

How does the text of the Tanakh teach about the Messiah? Some claim that the text is unclear, shadowy, or that much can be known. Others are certain that specific prophecies point to Jesus as the promised Messiah. Increasingly, a so-called Christ-centered approach suggests preaching Christ from the Old Testament—even in places where He isn’t! What is a responsible method for seeing Christ in the Old Testament? And how should we find Him there?

Jewish ministries in Europe today are affected by their identities and weight of history not to mention the rising tide of anti-Semitism. This workshop will highlight some examples of ministry within this context and review some more recent events. How did we respond? What could we have done better? The end of the session will be given to brain-storming and practical application. How can you stand and effectively minister in this new global context of terrorism and antisemitism?